“From the corners of the country, from the cities and the farms, with years and years of living, tucked up underneath their arms, they walk away from everything, just to see a dream come true, So God bless the boys who make the noise, on 16th Avenue.” -16th Avenue, Thom Schuyler.

Over the month I’ve been home in middle Tennessee during quarantine, I haven’t left my house except to gather essentials and internet to finish this semester. I have been watching Nashville though, from not too far away, grow increasingly silent. The country music capital of the world is not only the home of country music and is aptly nicknamed Music City for good reason. Walking down Broadway, Printer’s Alley, 16th Avenue and more will bring in a person into contact with rock, blues, soft pop, alternative rock, and so much more.  Nashville is a vibrant city, full of creative life on every corner. It is a city full of music, art, laughter, and so much more. To see a city so built upon and famous for its noise go silent, is heart-wrenching.

Over the last several months, Nashville and middle Tennessee have been getting what seems to be blow after blow, only to ease up to prepare for the next one. It started with the deadly tornadoes that ripped through middle Tennessee and especially the morning of super Tuesday. These tornados devastated the area for hundreds of miles as houses were torn apart, lives taken, businesses destroyed, and more. It was a massive blow especially to musicians as venues and studios were ripped apart, but not a crippling one. As families, artists, and cities tried to rebuild their lives and get back to some sort of normalcy, the pandemic hit suddenly. Middle Tennessee, pushing back onto its feet, was knocked down onto its knees. Now, we have more severe weather creeping in, with the fastest winds ever historically recorded in Nashville taking place just a few days ago during a major storm front which damaged a lot of the tornado recovery efforts and has left thousands without power possibly for another week or more.

And so, Nashville has gone silent. Broadway is eerie, no more confusing cavalcades of hopeful performers’ original songs pouring out of the bars and restaurants at night as shows and concerts, the lifeblood of Nashville, have been cancelled to protect the public. I’m reminded of the lyrics from the song quoted at the beginning, 16th Avenue, “It looked so uneventful, so quiet and discreet, but a lot of lives were changed, down on that little one way street.”  World-famous venues such as Tootsies, the Ryman Auditorium, the Grand Ole Opry, and more stand like ghostly shells frozen in time. It is, undoubtedly, a sad and anxious period for everyone, particularly artists and those who rely on the business these performances bring to making a living. How Nashville and the middle Tennessee community at large are responding though, is nothing new, and brings hope to these seemingly unending dark clouds.

Nashville is using their creative talents and what resources are available to respond in tremendous ways. Places of businesses have been converted into mask-making facilities, restaurants offering thousands of meals to first responders or their local community. Music stars who own their own restaurants, such as Alan Jackson, offering money, $1000 to each employee in his case, to help ease hardships. Businesses are bringing in employees to do tasks they might otherwise not have time for such as extensive maintenance or deep cleaning, just to bring hope and what wages they can to their workers. Artists such as Jack White, who owns Third Man Records, and other venues are offering stages for artists to come and livestream their work in hopes of earning money they would have otherwise gained from their full live shows. These shows can be intimate in a Zoom setting or livestreamed on Facebook to a wider audience. With less performances, musicians are having to rely more on side jobs so many of them already depend on such as music lessons, composition, rideshare, or wedding/church/birthday gigs. But with the pandemic, most of these have dried up, so venues giving them an opportunity to perform for money is a welcome relief, especially as some artists are taking home more than usual!

Stars such as Dolly Parton, Trisha Yearwood, and Garth Brooks have donated millions to COVID-19 research and recovery efforts. Artists and those in the music industry even came together to develop a website called www.gratitunes.org where you can choose a song and donate it to the Vanderbilt University Medical Center in Nashville to help cheer on, motivate, or relax doctors, nurses, and other health officials as they work tirelessly to combat the virus. The song donation is free, but also an option if you want to donate monetarily at the bottom. Other creative ways stars are offering hope is by doing what they know best, songwriting. Luke Combs released a new song titled “Six Feet Apart” which concludes the chorus with the hopeful lyrics, “But there’ll be crowds and there’ll be shows. And there will be light after dark, someday when we aren’t six feet apart.” Granger Smith released a parody of his song “Don’t Tread on Me” titled “Don’t Cough On Me”, which has a very creative music video to accompany it.
Overall, the most important thing is that Nashville, and middle Tennessee are not giving up. The constant courage, wisdom, and strength this area has shown has filled me with so much pride and inspiration, I want to offer my own words of hope to my fellow Tennesseans.

During the super Tuesday tornadoes, one of the first pictures I woke up to of the damage was seeing the building which houses the famous I Believe in Nashville Mural on the side, nearly completely destroyed. 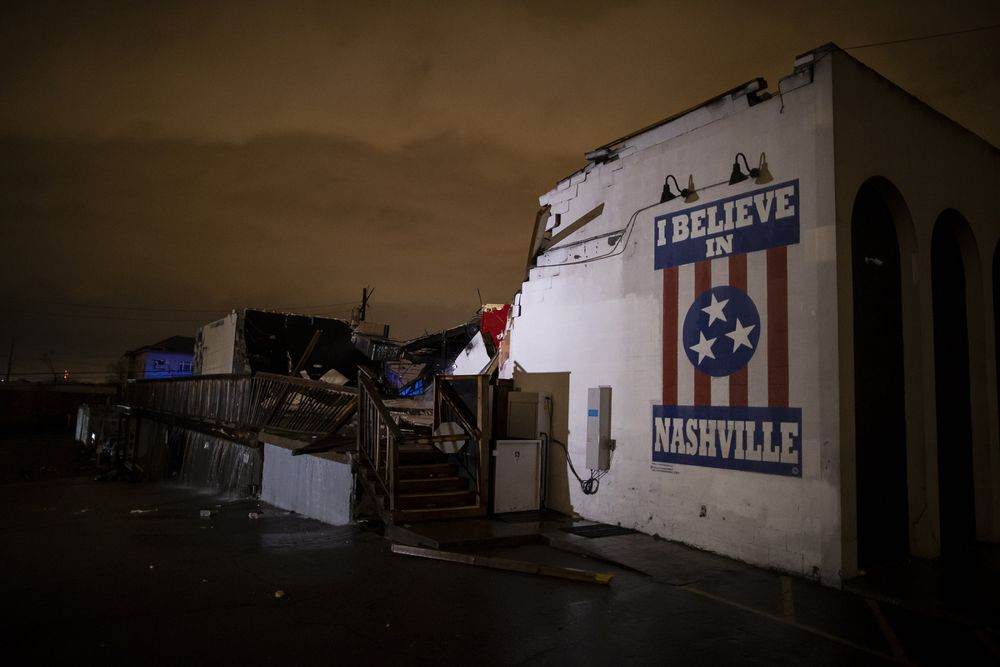 What struck me was not that pictures of the damage looked like screenshots from a Call of Duty game (see above, yes, that is real Nashville damage), but that there was already news coverage of families who had lost everything, saving what they could to donate it to neighbors they believed needed it more. Families taking bottles of water out of their crushed houses to neighbors with not even a foundation block left. Volunteering websites such as Hands On Nashville nearly crashed because of the influx of traffic to sign-up for clean-up. As I was signing up on every volunteer website I could, anxious to arrive home for spring break to help, I was reminded of the devastating 2010 flood, having just hit the ten year anniversary of it.
The flood, with over 16 inches of rain in less than 36 hours, absolutely bashed middle Tennessee. It caused over 2 billion dollars worth of damage to Nashville and millions more to surrounding areas, including my home which was flooded 3 feet deep. Videos of school buildings, entire churches, and more floating down the interstates were everywhere. No one was sure what to do, how to proceed, or if we would ever recover. Experts said Nashville, as well as the greater area’s economy would be in absolute ruins and nearly unrecoverable. But we’re stubborn, and middle Tennessee did what our great state is known for. We got to work and reminded everyone of why we’re called the Volunteer state. Like the tornadoes, people were offering what little supplies they did have to others, driving hundreds of miles, and spending countless hours to help neighbors and strangers alike clear debris, rebuild shelter, and claim back some power in their lives. People were shelling out money to buy generators and tools for entire neighborhoods, hosting outdoor cooking marathons to feed volunteers, and driving from door to door to check to see if anybody needed anything at all. Middle Tennessee, and especially Nashville, bounced back better and brighter than ever. It wasn’t easy. It took a lot of blood, sweat, and probably most of all, tears, but we didn’t just pull through the gate of recovery, we hopped up in our jacked up four wheel drive and rammed through that sucker.
The people of Nashville and middle Tennessee are incredibly strong and full of determination which not only shows in their music, but their unending hardwork and dedication. Now, Nashville is facing a new challenge, one where helping others is made harder by not being able to be around them as easily. However, I have full faith that the people of that great city and this great state will find even more ways to adapt and help than they already are. If we can continue to put as much effort and stubbornness into combatting this virus as we can fighting natural disasters, it won’t be long until the streets will be filled again with tourists and Tennessee natives strutting Nashville in cowboy boots and denim and twangs of guitars and sultry voices spilling out from bars filled with laughter, hot chicken, and cold drinks. Once again, we will hear announcers on our radios, telling us, “We’re not sure where you’re listening, but it’s a beautiful night in Nashville, Tennessee and we’re delighted to have you tuned in.” We will be okay. Stay safe. Take care of yourselves, and each other.